Built in the 13th century

The residential tower was owned by the
Archibishops of Trier until 1654.
Its name refers to the Lords
of Schöneck.

This inhabited tower, also referred to as “Alte Burg” (Old Castle) was used by the archbishops of Trier when they resided in the city in the 13th/14th century. The residential tower remained the property of the archbishop until 1654. The lore of the name “Schönecker Burg” has not been clarified. Two different noble families with the name “von Schöneck” come into question. The one is from the Eifel; the other from Hunsrück. Both houses worked for the territorial lord.

The "Schöneck Castle" can be found in the sources as the "Old Castle" or "Episcopal Palace".  In 1816, the chronicler Büchel cited hitherto unverifiable documents that are supposed to prove the old rights of the Lords of Schöneck to this building. It can be assumed that Büchel found the name "Schöneck Castle" in the vernacular. According to the tree features and the references available in the written records, the building was constructed in the 13th century.

The mighty three-storey stone building was a residential tower that still impresses with its fortified appearance today. The Renaissance oriel has been greatly simplified by subsequent alterations. Until the 17th century, there is also said to have been a battlement.

In the townscapes by Braun-Hogenberg and Merian, we see the exemption from the other buildings. The residential tower was probably surrounded by park-like grounds. 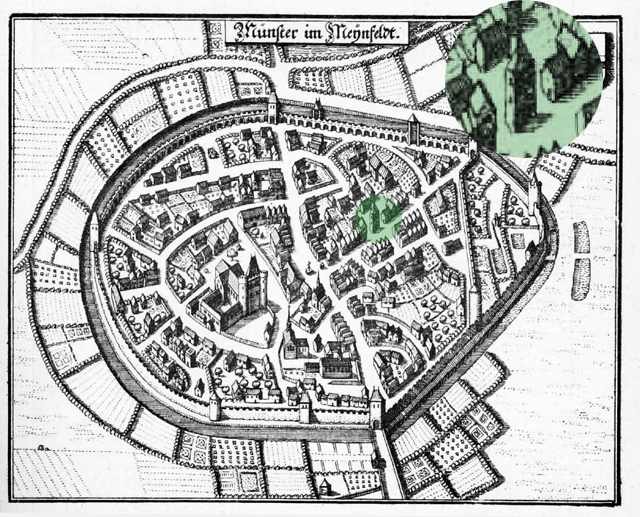 The question of the possible relationship of the Lords of Schöneck to the residential tower also remains to be clarified. There were two families of Schöneck. One, had its ancestral seat in the Eifel above the valley of the Nims near Prüm, the other had its ancestral seat above the Ehrbach valley in Hunsrück near Boppard. Only for these Schoeneckers can connections to Münstermaifeld be proven. In the 14th century, they were closely connected to the collegiate convent as canons and provosts. A Conrad von Schöneck, from the Hunsrück house of Schöneck, was mayor of Münstermaifeld in 1306/07. Both noble families only came into being in the 13th century, the Hunsrückers in 1224, the Eifelers in 1264. It is known that the two houses were often confused.

After the sale of the residential tower in 1654 by Archbishop Kasper von der Leyen to the "Kellner" Johann von Ufflingen, the house remained inhabited by officials until the end of the electoral state. After that, it became a bourgeois house.

Matthäus Merian the Elder (1593-1650) was a Swiss-German engraver and publisher from a Basel family. His main work is the Topographia Germaniae. It was published from 1642 and continued after his death. The complete work contains 2142 individual views of towns, castles and monasteries. The town views give us reliable information about the layout of streets and the position of buildings in the 16th/17th century. Merian was able to draw on the older work of Frans Hogenberg (1535-1590), who recorded the condition of towns before the destruction of the Thirty Years' War in his town views "Civitates Orbis Terrarum", also for Münstermaifeld.

A fief was a piece of land (with people and buildings), a political office, a right (to fish, hunt, collect taxes). The owner (feudal lord) gave this fief to Vassal, who was obliged to serve him, under the condition of mutual loyalty.

Archbishop and Elector of Trier (1307-1354). Balduin of the House of Luxembourg, brother of the German king and Roman emperor Henry VII. (1308-1313), was one of the most influential imperial princes in the first half of the 14th century. During his reign, Münstermaifeld became an important base for the territorial policy of the Archbishop of Trier. Thus the completion of the construction of the collegiate church was also a demonstration of Trier's presence vis-à-vis neighbouring Cologne. The reinforcement of the town fortifications confirmed the importance of the Münstermaifeld office for securing the archbishop's rule. The enforcement of the land peace protected urban development against encroachments by the nobility.

There are two Schöneck lordships. One of them, the Eifel Schöneckers, has its ancestral seat above the valley of the Nims near Prüm.This family had originated as a branch of the Counts of Vianden in 1264. By 1370, the male line of these Schoeneckers had already died out. Their inheritance fell to Electorate Trier in 1440. They were ministerials of the Archbishop and Elector of Trier. Through the Counts of Vianden, they were also connected to the House of Luxembourg, from which Archbishop Balduin came. From 1270 onwards, they were feudatories of the Counts of Luxembourg. Balduin had to use force against Gerard von Schöneck in 1352/53 for breach of the peace. The second family Schöneck, had their ancestral castle above the Ehrbach valley near Boppard. They had arisen in 1224 as a branch of the Bayer family of Boppard. They were very closely connected with the monastery. Philipp von Schöneck was provost in 1290/97-1300, and his brother Emmerich belonged to the monastery as a canon from 1312-1332 and became provost in 1333. For Archbishop Balduin, they temporarily held the office of burgrave at Thurant Castle. Conrad von Schöneck was Schultheiss in the town in 1306/07. They were imperial ministers until they lost their independence to Archbishop Balduin in 1354. Conrad the Red of Schöneck was involved in the Eltz feud (1331-1336) as an enemy of Balduin and was defeated. These von Schöneck became extinct in the male line in 1508. They too were inherited by Kurtrier. In Münstermaifeld, Schöneckers are mentioned in connection with the "Burg" and the Rother Hof. However, it is unclear which Schönecker are meant and what connected them with the castle and the farm. Schoeneckers can also be traced as landlords in Sevenich, 2 km from Münstermaifeld.

On the life of Johann Büchel V. (1754-1842) see Büchel House. He is to be presented here with his work as a chronicler. He held a wide variety of municipal offices. Thus he was very well informed and had access to sources that no longer exist today, which go back to the 16th century. In his biography, which he began in 1828, he lists 58 titles of his manuscripts. Among them are the 12 chronicle volumes that are indispensable for researching the history of Münstermaifeld and the Maifeld. They were written between 1811 and 1828.

The governing body of the monastery was the chapter, the assembly of the canons. Numerous conditions had to be fulfilled to become a full member. Ordination to the priesthood was not one of the requirements. The canon's official position was called prebend. The number of residing canons varied between 12 and 16. Only members of the chapter could become holders of special dignity and responsibility, such as dean. Recommendations for admission to the chapter as canons came from the archbishop, the pope or even the king.

The provost represented the monastery externally. He had to defend the rights, goods and revenues of the monastery and preside over the tribunal. The provost had his own rights, duties and income vis-à-vis the chapter. He was to be elected by the chapter and confirmed by the archbishop. The papal recommendation for the bestowal of the benefice was often decisive. After 1515, the office of provost became another dignity and source of income for the Archbishop of Trier.

Archbishop of Trier 1652-1676. His most important task was to rebuild the Electorate after the Thirty Years' War. He prohibited further witch hunts in the Archbishopric of Trier. For Münstermaifeld and the 26 known victims of the witch mania, this order came too late.

He was responsible for the administration of monetary and in-kind duties to the sovereign.