The present Town Hall was reconstructed
in 1699-1700. The original building was
burnt down by soldiers of
Ludwig XIV. in 1689.

The Town hall was constructed in a Renaissance style as a substitute for the preceding gothic building, which had been destroyed by fire. Figures and the crest of the gable side document the merger of municipal self-administration and the sovereign authority. Electorate of Trier, and with him Münstermaifeld, fell victim to the politics of burnt earth ordered by Ludwig XIV during the Palatinate War of Succession (1688-1697). The city was almost completely destroyed by pillage twice, in 1689 and 1691. The second fire was the result of a mix-up with Münstereifel by Marshall de Boufflers. The Town Hall also fell victim to the fire of 1689. The reconstruction in the old style could not be completed only 10 years later. Since 1998, the mayor and city council have once again returned to the venerable site of municipal self-administration.

The Renaissance building was erected in 1575-1583, after the Gothic town hall on this site had fallen victim to a fire.

When Münstermaifeld was burnt down by the soldiers of Louis XIV in 1689, the town hall also burnt to the ground. The renewed pillaging of the town by Marshal de Boufflers, caused by a confusion with Münstereifel, delayed the reconstruction. From 1699 onwards, the town hall was rebuilt according to the old plans.
The figures and coats of arms on the gable end of the building testify to the city's self-confidence and the city rule of the Archbishop of Trier. On the side of the upper pediment are the figures of Justice and Prudence. In the lower part of the pediment, an aedicule with a relief of a man with a scythe, a bundle of ears and a cornucopia, allegory of prosperity.

Between the windows of the first floor, the old town coat of arms of Münstermaifeld, a double shield, the coat of arms of the Electorate of Trier on the outside, an upright key on the inside.

In the archway the official coat of arms of the town, with the cross of the Electorate of Trier and two crossed keys.

The archbishop's sovereign watched over the city's self-government. After 1815, the eagle coat of arms testifies to the affiliation to the Kingdom of Prussia. 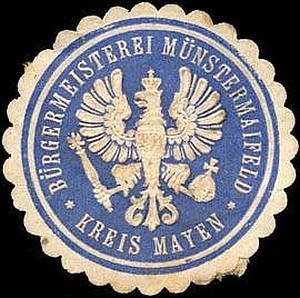 The archway supported on the north-east corner of the town hall, the Michael Gate, which separated the collegiate immunity from the bourgeois town, can still be seen in the base of the arch. The councillors could go through a passageway of the gate to St Michael's Chapel opposite the town hall, where they gathered for prayer before their council meetings. On the sloping corner of the house, in front, was a neck iron.

In the town ordinance of 1576, we are looking at the time when the town hall was built, we find the following procedure for appointing a mayor of the town: On the second Thursday after John the Baptist (24 June) of each year, the incumbent mayor had the town servant blow the horn on the walls and in the market, as a reminder that his term of office had expired. On the following Thursday, after the bells of St. Peter's had rung three times, the mayor and his aldermen met with the citizens in the Hospitalsgut. At this meeting, the citizens could voice their complaints and wishes. Then the aldermen consulted and elected a candidate. The old mayor presented the proposal to the representatives of the archbishop, the "Schultheiß" and the "Kellner", and then to the citizens. The new mayor was thus chosen. He vowed to the "Schultheiß" to fulfil his duties faithfully and took the oath before the citizens. The mayor's term of office lasted six months, from 24 June to 26 January.

The next but one building in the direction of the collegiate church (Martinstraße 3) is the birthplace of the sculptor, painter and glass painter Professor August Weckbecker.

He was born in the house, which housed the publishing house and print shop of the Münstermaifelder Zeitung from 1893-1942, on 28 May 1888 as the son of the tanner Johann Peter Weckbecker and his wife Helene Alt. He lived in Munich, where he was sponsored by King Ludwig III. His clients, most of them ecclesiastical, appreciated his masterly craftsmanship and his formal language, which was committed to tradition. Among his admirers was Eugenio Pacelli, later Pope Pius XII, Pope Benedict XV sat for him as a model for a bust and Pope Pius XI commissioned him for the Madonna "Patrona Spirensis" in Speyer Cathedral, pictured below. August Weckbecker died in Munich on 13 September 1939.

A framing of niches, e.g. in a façade.

This chapel opposite the town hall existed since the 13th century. It was the chapel of the St. Michael's Brotherhood, the oldest brotherhood in the town. The brotherhood was particularly active in caring for the poor. For his own burial, a brother was expected to give a horse, a cow, a robe or at least a small sum of money. The chapel could be reached via a covered walkway from the town hall. After the building burnt down in 1770, the chapel and the ossuary below were demolished.

The Schultheiss represented the interests of the sovereign locally, including in the town of Münstermaifeld. He made sure that the sovereign's orders were carried out. His duties included the management of the town's college of aldermen.

He was responsible for the administration of the money and in-kind contributions to the sovereign.