Johann Büchel V (1754-1842)
was born here. He worked for the
welfare of the town as a citizen
and its Chronicler.

When looking back at his life, Johann Büchel V. called himself a “prolific writer". After his father determined that he would become a theologist, he had to take over the heritage as a cloth manufacturer following his father’s death. As a master of the woollen cloth weaver guild, he promoted the development of his trade. As a citizen, he worked for the good of the city in various voluntary offices. Also since 1794, under French reign, he still considered himself responsible for the common good. This resulted in his ruin, when he vouched for the contributions that had to be paid. Imprisoned as a delinquent debtor, and only partially compensated, he dedicated all his time to writing. We owe the 12 volumes of a chronicle of the city and of Maifeld to this circumstance.

He was a member of the high and town court several times, a town councillor, as town builder he ensured the maintenance of the building infrastructure, and as excise master he succeeded in almost doubling the town's income from wine tax from 620 to 1100 gulden. In 1794, as captain, he led the troops of the central Maifeld against the French revolutionary troops.

But he was needed at the head of the town, and so he became mayor again in 1794 and remained in political charge during the French occupation of the town in 1795/96. The Tree of Liberty, 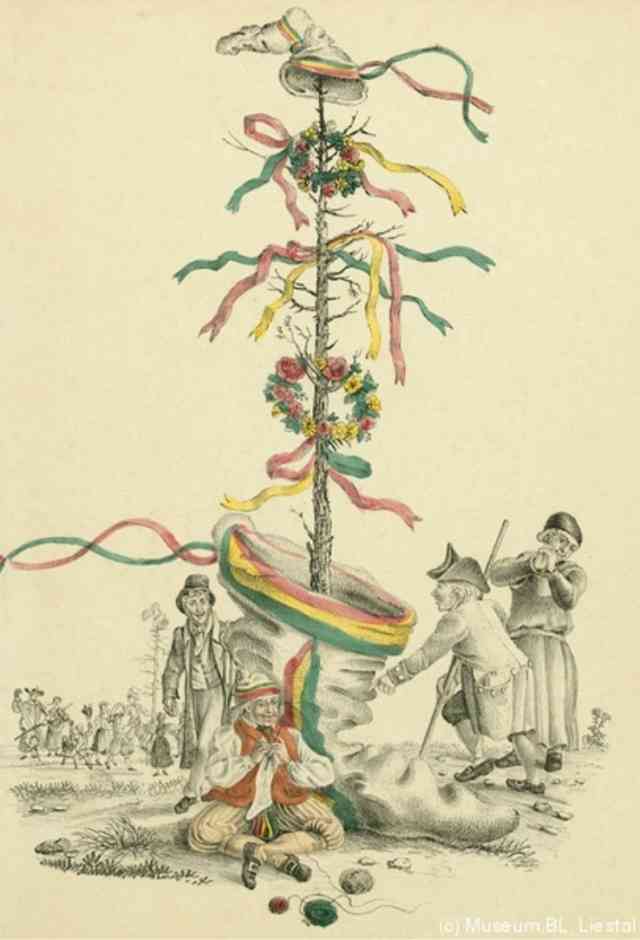 which was supposed to herald the happiness of the new era on Münsterplatz in 1798, did not bring Büchel any luck. During these years, he had to pay the city's contributions to the occupying forces and lost almost his entire fortune with the bonds he subscribed to. The French administration refused to compensate him. Thus he fell into the hopelessness of increasing indebtedness.

In December 1806, his creditors forced him into a trial, which ended with a prison sentence in Koblenz, from which he was only released on bail. His possessions were lost. His wife Sybilla Boos, to whom he had been married since 1775, had retired to the fulling mill in the Schrumpftal. He followed her there until 1811, when he was finally awarded compensation. He returned to Münstermaifeld. He was granted 2,000 Rhenish thalers; he himself calculated his outstanding debts at 17,000 thalers.

From now on he added the letters p.m.m.t.g. = pro meritis male tractarunt Agamemnona Grai to his signature. (The Greeks have rewarded Agamemnon badly for his merits) In free translation: "Ingratitude is the reward of worlds".

In the following years he produced his extensive work with over 58 manuscripts, of which the 12 volumes on the history of Münstermaifeld and the Maifeld remain indispensable. These books were written in 1811-1829 under the pseudonym "Brother Nikolaus Linden". Büchel called himself, with sympathetic modesty, a "polygraph", a prolific writer.

After the death of his wife in 1815, he withdrew entirely to his books. Looking back on his life, he took a pessimistic view of the future of his city. The French Revolution, then Prussian rule, had unleashed challenges that he felt the small town could not meet. He criticised the speculation with real estate, the search for quick money. He foresaw the town's loss of importance and economic decline. Evidence for him was the growing number of emigrants who also left Münstermaifeld. It was not only hardship that drove the people of Münstermaifeld abroad, but also the narrowness and persistence of the rural Catholic way of life, which even the revolutionary events of 1830 and 1848 could not shake. Among those who left Münstermaifeld to fight for their ideals were Peter Kaufmann and Salomon Kaufmann. Like Büchel, they were craftsmen and autodidacts who found fulfilment in writing.

Peter Kaufmann was born on 30 September 1800 as the illegitimate son of Margaretha Süsterhenn at Hintergass 4 (today Kirchspielstraße 6) in Münstermayfeld. As a trained tobacco spinner, Peter Kaufmanm came to Philadelphia in 1820, where he began intensive self-study alongside his work in a tobacco shop. In 1825 he was a partner in the founding of a so-called "Labour for Labour" shop in Philadelphia. Following the example of Rapp and Owen, he founded the "Teutonia" community in 1827, which aimed to follow a religiously based ideal of communal ownership. Four years later he settled in Canton, Ohio, and became editor of newspapers such as the "Vaterlandsfreund" and "Geist der Zeit" and a very successful almanac. Kaufmann was the author of several philosophical works, and his name is found in every Amrican encyclopaedia of philosophy. He was one of the leaders of the General School Committee of the Germans in the United States. Politically, he was involved with the Democratic Party as a close friend and confidant of President Martin van Buren ( 1836-1841). He died in 1869.

On the site of the house at Pilligertorstraße No. 10 stood a house that was demolished at the end of the 19th century and belonged to the master tailor Wilhelm Schwab. Benjamin Kaufmann, a saddler, lived here with his family. His son Salomon, born in 1835, had left for Paris in 1860 to avoid military service, became a socialist here and was expelled from the country in 1869 for anti-clerical agitation. He went to England and founded a factory for gift articles. At the same time he wrote for the newspapers "Freiheit" and "Der Sozialdemokrat", which were banned by the Socialist Act of 1878. During a visit to his father in Münstermaifeld he was arrested and charged with "high treason" before the Reichsgericht in Leipzig. The indictment against the "box maker and man of letters" Salomon Kaufmann was before Bismarck for his perusal. It was the first trial before the newly founded Imperial Court. Thanks to his skilful defence, he was acquitted. He died in London in 1903.

But Büchel also sensed the consequences of the change in production methods when he looked at the development of the cloth-making trade. While there were still 30 clothiers in Münstermaifeld in 1792, there were only 7 in 1832. At the end of his life, he had withdrawn completely into his world of folios. Having become a poor man himself, however, he remained true to his commitment to the common good. He continued to help as best he could.

On his tombstone we should read: "My relatives have forsaken me, and those who knew me have forgotten me". How much his loneliness embittered him can be seen in the sketches he made for his gravestone 10 years before his death.